skip to main | skip to sidebar

Three years ago I took an herbal medicine course with Garliq at his Urban Herb School.  I spent eight months (two classes a month) foraging for plants, roots, flowers and berries and then making them into teas, tinctures and salves.  I re-learned the skills that my Austrian Oma had but didn't get the chance to teach me.  I now have a cupboard full of tinctures and oils that can cure most everyday ailments.  We have a few family favourites, and I will share those as we move through the seasons.  It is almost elderflower time!

Recently I Spring-cleaned my cupboards and I came across a few bottles of magic that needed processing.  I found a jar of calendula soaking in almond oil and a bottle of St. John's Wort also in almond oil.  I had forgotten about these, but luckily they hadn't gone 'off'.  I think it was the cool, dark cupboard and the vitamin E oil on top that preserved the medicinal oils.  I left them on my counter to remind me to play with them and yesterday was the perfect rainy afternoon to putter in the kitchen. 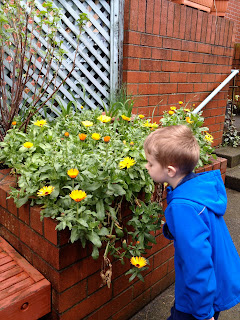 The calendula oil was slated to become a cream.  The calendula I grew in my garden (that's my urban calendula garden above).  Some of the original flowers came from seeds that Garliq shared with us from his community garden.  I pick the flowers from Spring to Fall and let them dry in a paper bag - shaking them every once in awhile to ensure they dry evenly.  I don't pick all the flowers, though, as I like to collect seeds at the end of the summer.  Some of the seeds get thrown back under the flowers to ensure a hearty harvest.

I haven't had any luck with making medicinal oils using fresh ingredients.  The moisture in the leaves and flowers can make your oils rancid.  I have had many jars bubble up and smell just nasty.  But I learned from my mistakes and now use only dried flowers, and I haven't had any turn rancid since.  Fill a jar with your blossoms and then cover with oil (make sure that no little bits are sticking outside of the top of the oil as this can also lead to rancidity).  At the school we used olive oil, but I found that the olive colour and smell take over the delicate floral nuances, so I switched to a light almond oil.  If you are in a rush, you can cook the oil with the flowers right away, but I prefer letting them slowly steep on a window sill for about six weeks.  The calendula oil I found in my cupboard had been there for about 8 months. 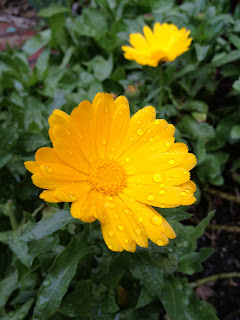 In the past I have used Rosemary Gladstar's recipe for creams.  It is a great recipe but I wanted to try something new and was inspired by recently meeting the lovely Leona from My Healthy Green Family and decided to give her recipe a try.  It works so well, and she describes the process much better than Rosemary.  I made a few amendments because I was making a calendula cream, but essentially the process is the same.  My strained and measured calendula oil went into a pot with the measured beeswax.  Once the beeswax had melted I poured the mixture into my blender with a few drops of vitamin E oil and rose oil for added scent.  As it cooled to room temperature, I boiled some water and dried calendula on the stove and then let it steep into a lovely infusion.  This infusion was strained and allowed to cool to room temperature as well.  Then it is time for magic!  Start up your blender with the oil in it on a low setting and pour the infusion in a slow steady stream into the middle of the whirring oil.  In a few seconds it creates an emulsion and you have cream!  If you have ever made mayonnaise, you will have see the same reaction.  Keep pouring and blending until the infusion is all gone.  I then scraped down the sides of the blender to make sure all the goodness was incorporated.  Blend a few seconds more and it is all done.  Pour into glass jars. I keep one small jar in the bathroom for regular use and keep the rest in the fridge because there are no preservatives like in store bought creams. Refill small jar as necessary. 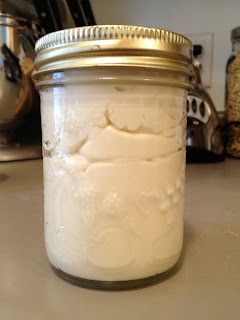 So far, I really like My Healthy Green Family's recipe.  The texture is more like a traditional cold cream than a lotion.  It absorbs well on my hands.  I forgot to try it on my face this morning - will do tomorrow.  Next time I think I'll add more than ten drops of rose oil.  I like my cream to have some scent - a small luxury.  This calendula cream will have many uses - it is a healing cream, with anti-viral and anti-inflammatory properties.  I can be used on rashes and bumps and bruises.  I am excited to have it in my medicine chest for emergencies and for daily use of dry skin.

My second project was to make use of the St. John's Wort oil that was also lingering in my cupboard.  The St. John's Wort blossoms were collected on a remote road on the way up to Rock Candy Mine near Grand Forks in the summer of 2011. The long forested road was lined with tons of these tiny yellow flowers.  It was so beautiful - I couldn't resist to bring a few home.  Did you know that these little yellow flowers have a secret?  They may look bright yellow, but are actually red inside!  So if you make a tincture, tea or oil, the result will be pinkish-red.  We all know that St. John's Wort is commonly used to treat depression.  A tincture is great to banish the blues. But those sunny yellow flowers can not only help make you smile, they can also relax your muscles and sooth burns - which I find kind of funny because the medical community tells us that St. John's Wort can make you more sensitive to the sun. If you subscribe to homeopathic thinking then you will know that like treats like; and therefore something that would make you more sensitive to sunlight would also treat the adverse effects of that sunlight.  St. John's Wort also has anti-bacterial, anti-fungal and anti-inflammatory properties - perfect for burns and rashes.

I didn't use a recipe for the St. John's Wort salve.  A salve is simply an oil mixed with beeswax.  The beeswax gives the oil some structure so that it is easier to handle.  The amount of beeswax used depends on how hard you want you salve to be.  I strained the blossoms out of the oil and put it in a pot on the stove.  There was probably a cup and a half of pink oil - I wish I took a picture so that you could see the amazing colour.   I added 1.5 oz of beeswax to the pot and let them melt together.  I did a test (take a spoon and dip it in the warm mixture and put it in the freezer for a few seconds) to see if it was the consistency I wanted - I didn't want a solid rock; I wanted it soft, but not runny.  It was perfect.  Pour into glass jars and allow to harden.  The end. 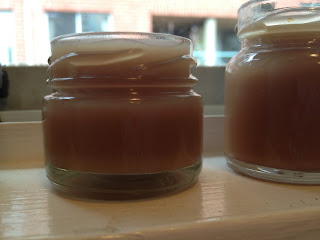 You can see the pink tinge in the photo above.  So pretty and smells great on it's own.  Let's hope it works!  California is calling us and we may be in need of the sunburn salve in the near future.

Fun! I use the Rosemary Gladstar recipe right now, but I'll look forward to trying out the new one you just linked to. I too didn't like the olive smell, so if I'm making a big batch I'll often buy extra light olive oil just for creams and salves - available easily in the grocery store and fairly cheap too:-) I need to start finding more wild foraging spots here, we've been so focused on housebuilding that I haven't done enough exploring...........

oolawoola
Vancouver, Canada
I am a married SAHM with two littles - Miss B and Mr. Mister. I knit and spin and dye and sew. I am trying to live as green and sustainable as possible while raising the littles in the city and crafting along the way. And now we have a dog!